On the Eleventh Day of Christmas...

...my true love gave to me, Wonderstruck. 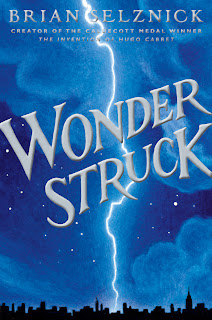 I picked up this book from my library last week and finished in about 2 hours.  Brian Selznick did it again.  The author, now famous because his book The Invention of Hugo Cabret, was turned into a movie, charms us with his deeply satisfying combination of story and pictures.  Running about 600 pages long, Wonderstruck tells two stories.  The pictures tell the story of Rose, a girl who obsesses over New York City and a famous actress.  The words tell the story of Ben, whose mother has passed away and he wonders about the father he never knew.  As the two stories fold in and out, we are taken on a journey to follow what they wish for most.  I don't want to give anything away.  I was gasping by the 10th page.  I recently put this book in front of a reluctant reader who was put off by the massive size.  However, when he started to flip through the pages I watched his eyes grow big and in an almost-whisper, "Woooaah."  Brian Selznick has the ability to make all of us wonderstruck!
Email Post
Labels: brian selznick deaf culture hugo wonderstruck