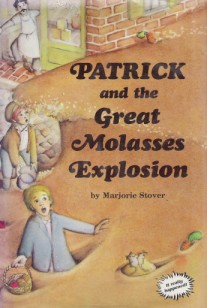 Today marks the anniversary of the Great Molasses Flood of Boston.  On January 15, 1919, a molasses tank in the North End of Boston burst and a tidal wave of molasses swept through the streets.  I remember reading this book, Patrick and The Great Molasses Explosion by Marjorie Stover, when I was little, not believing it was true.  I was thrown off that such an event could actually happen.

While the idea of a molasses flood sounds remarkable, it was actually a tragedy.  There was a significant amount of damage.  Check out the Boston Public Library Photos HERE.  In addition to the structural damage, 21 people lost their lives, including two 10 year old children.

Boston folks, I wish there were more kids books to share about this interesting part of history but this one will do.  In addition, here is a clip by Stephen Puelo.  He wrote a book called Dark Tide, an adult book, all about the events surrounding the Great Molasses Flood.