This resolution of putting my ducks in a row has turned out to be quite productive.  Yesterday I did some things around my apartment that I have been putting off since I moved in.  I also dropped my car off to get my brakes done and today...all done!  I am ever so thankful to my mechanic here in LA.  It is quite difficult to find a good one and I have been blessed in both Boston and LA.  So in honor of my mechanic, Chris, for fixing my car (her name is Foxy Loxy) I bring you two appropriately themed books! 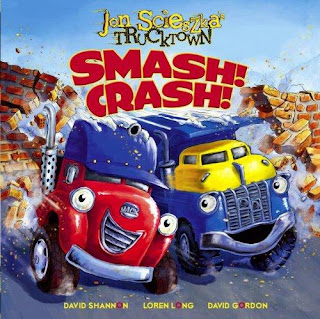 This book series is by one of my all-time favorite authors.  I bought this for my nephew Nate last year.  He is just the type of little boy who loves cars, trucks, tractors, and anything with wheels in general.  In this first book of the series, Jack and Dan (a truck and dump truck, respectively), decide to smash and crash into everything.  Nate loved reading the repeated lines of "Smash! Crash!" as the drove into everything.  Not sure if my mechanic would approve but Nate gave it two thumbs up! 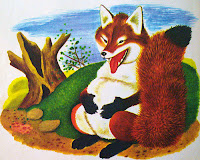 Some of you might know this story from the movie that came out a few years ago but I assure you it has been around for a looooong time.  There are lots and lots of versions with different endings and different characters.  Sometimes it is also called Henny Penny.  Either way, the story goes that the chicken character thinks that the sky is falling.  So she/he decides to tell the king and along the way finds a bunch of other friends with rhyming names, Ducky Lucky, Loosey Goosey, etc., to help.  Eventually they run into Foxy Loxy.  In some versions the sly fox eats 'em all. In others, they outwit the fox.  Either way the warning is to not believe everything you are told.
Email Post
Labels: car chicken little ducks foxy loxy jon scieszka smash crash