On the Fifth Day of Christmas: Books About Rabbits

On the Fifth Day of Christmas...

Earlier this year, the New York Times had an interesting article about how often children's books feature animals, even if the animals are not particularly behaving in an animal-like way at all (the author gives the example of "the family of raccoons that bakes hamantaschen for the family of beavers at Purim").  For some reason this article stuck in my head, and I was again reminded of this when I realized that 5 of the 6 of my planned posts are about animal books (and the 6th contains 2 books about whales)!  Go figure!

So here we go with 2 great picture books about RABBITS!

The Black Rabbit by Philippa Leathers 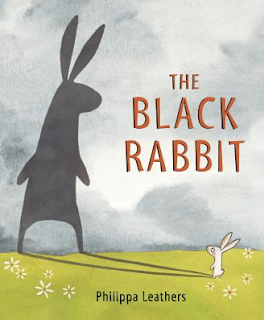 This is a wonderful picture book about a tiny rabbit who is worried about the giant black rabbit that seems to be following him everywhere, until the giant rabbit helps him out of a tight spot.  My 2 year old loves this book as much as I do, and he acts out the most dramatic scenes very seriously over and over again every time we take this one off the shelf.

Lion Vs Rabbit by Alex Latimer 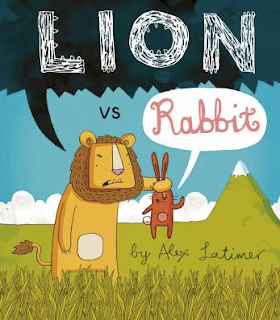 This is a more complicated tale of a stream of animals that come to town to challenge a bullying lion to a competition.  The deal is, if the challening animal wins, the lion promises to stop his constant bullying around the jungle: 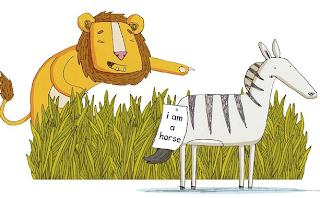 After beating a bear at boxing, a moose at fencing, and a tiger at arm wrestling, one last animal arrives, and it is up to this small rabbit to save the day through a series of interesting challenges.  You already know I'm a big fan of Alex Latimer (The Boy Who Cried Ninja, Penguin's Hidden Talent), and he does not disappoint in his newest book!  Here's a peek inside as Lion and Rabbit go head to head, game show style: 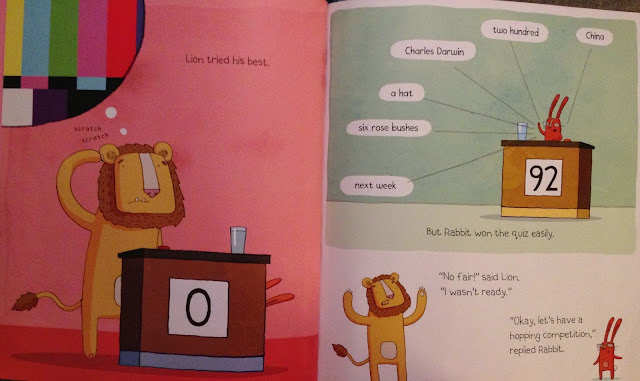