Our final stop on our tour of France was the City of Light - Paris. I first visited Paris over 10 years ago with a friend from college. A few years ago I got Paris fever bad. I watched every movie that came out about Paris. I googled it. I ogled over pictures. I had to get to Paris.


When the BF and I decided France was the place for our first vacation together, a part of me did a victory dance. I would finally get my fix.

In Nice we had ditched our rental car and opted for foot travel only. We also wanted the magical experience of train travel through France. Fields of vineyards turned to fields of sunflowers as we made our way first along the coast and then straight north to Paris. We arrived at our 6th floor walk up in Montmatre at about 7 pm. All I wanted was a glimpse of the Eiffel Tower before we turned in for the night. A couple of hours later, we made our way to a bridge with a view. We made our next stop Harry's New York Bar. This is Europe's oldest cocktail bar, according to them, and it is the real deal. Here you are welcomed with solid cocktails, a list of rules for the IBF society on the bottom of the menu, bartenders in white coats, and hot dogs. We noshed on some hot dogs and sipped on cocktails.


On our way home we stopped at an amazingly tacky wagon wheel restaurant. Moments after we left, France beat Germany in the Euro Cup, advancing them to the final game. The streets of Paris were flooded with late night revelers. It was pure joy.


The plan for Paris began with my naive declaration, "Paris is a small city. I think we can walk the whole thing." Day 1 of Paris, Day 7 of our trip, would begin with a walk through the entire city. I mapped out a circular route that would take us through our neighborhood, drift toward the Latin Quarter, head past the Eiffel Tower, and then back home. Day 2, Day 8 our of trip, would be what we dubbed "Hemingway Day" in which we would drink and read our way through our local bars and brasseries. Day 3, Day 9 of our trip, was left wide open to whatever we had left to do.


Despite the lessons learned in these 3 days, I am pretty satisfied with the overall plan. I'm going to split these posts up. It's a lot to read...and write. Bare with me. :)

Day 1 of Paris
The loop around Paris started in Montmatre. I wanted to stop at the Cafe de 2 Moulins, famed for it's role in the movie Amelie. Basically I am pretty sure if I had been born in France my life would be just like hers so this was a pinnacle moment for me. The cafe was perfect.


After espresso and croissants, we hopped a few blocks to snap a picture of the Moulin Rogue and then we were on our way across the St. Martin Canal. I wanted to stop at Holybelly, which was supposed to have great brunch but the line was about 45 minutes and we needed food quickly. We continued on our way to Au Chat Noir, a funky beatnik bar in the Oberkampf area of Paris. This neighborhood is known for it's funky nightlife and street art. Although, we really found amazing street art all over the city.

After a refreshing beer, we stopped at a boulangerie for a street bread sandwich, which we ate while walking. We swung further south to see the Bastille monument.

The plan from here was to head up to the Montparnesse tower but we were about 5 hours in and pretty exhausted. We headed straight for the Latin Quarter. Here, I wanted to follow in some of Hemingway's footsteps. I had just finished A Moveable Feast in Nice so I was ready. We strolled along the Seine and made our way for Shakespeare and Company, a for real bucket list item for me. Since I had just finished my book, I bought another book to take with me. Then we headed to Deux Maggots so I could sip a drink where Hemingway used to do the same.

From here, the Eiffel Tower was next. The entire lawn was blocked off in preparation for the Euro Cup final game so we couldn't relax. We grabbed some ice cream, hopped on the carousel, and then moved on the to the next stop. 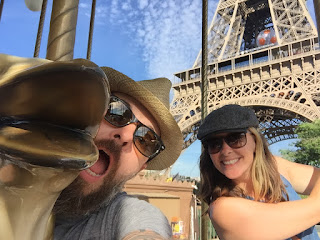 After the Eiffel Tower, we crossed the Champs Elysses so we could catch site of the Arc de Triomphe. We landed in Pigalle, just a mile west of our home, and snagged dinner at a little restaurant - completely wiped. BF's phone tracks mileage so we checked it out and we clocked in at 16 miles. OOF!

Lessons Learned
1. Paris is not small.
2. Cute sneaker socks don't last for 16 miles.
3. Always make sure you know where the closest bar is for when you can't walk another step.
4. Always pack more than 2 books when traveling for 10 days.
Email Post
Labels: adventures dancin in france day 5-6 france montmatre paris paris day 1