The world. Man. It can do a number on your soul right now, at least that's what I'm feeling. Despite limiting my social media, I find it way too easy to get sucked in. Whenever I start reading the news feed on my Facebook, I can't believe the level of hyperbole from people I love. Vitriol and hate spewed. "Those people" they say - from both sides of the aisle. So many people I love pointing fingers, blaming others.

I won't hide behind the fact that I lean liberal. I think you all know this. And I admit, I've had my fair share of not-so-kind words for our current administration. Behind my liberal views, however, is the idea that we should be inclusive, supportive, and commit to the common good. My close friends include those are who rich, poor, highly educated, illiterate, a wide variety of race and ethnicities, gay, straight, religious, agnostic, tall, short, and yes, even Republican and Democrat.

I have struggled with what to say when I hear others speak with such anger and hate. It comes from people in all those groups mentioned above. This past week, I read something, from a republican, gasp!, that really resonated with me. Dan Crenshaw, a former Navy Seal and recently elected to Congress, was mocked by SNL's Pete Davidson. They made up and Crenshaw showed great diplomacy on the show. He followed it up with this article.

Crenshaw says,
How, then, do we live together in this world of differing ideas? For starters, let’s agree that the ideas are fair game. If you think my idea is awful, you should say as much. But there is a difference between attacking an idea and attacking the person behind that idea. Labeling someone as an “-ist” who believes in an “-ism” because of the person’s policy preference is just a shortcut to playground-style name-calling, cloaked in political terminology. It’s also generally a good indication that the attacker doesn’t have a solid argument and needs a way to end debate before it has even begun.

Similarly, people too often attack not just an idea but also the supposed intent behind an idea. That raises the emotional level of the debate and might seem like it strengthens the attacker’s side, but it’s a terrible way to make a point. Assuming the worst about your opponents’ intentions has the effect of demonizing their ideas, removing the need for sound counter-reasoning and fact-based argument. That’s not a good environment for the exchange of ideas.

Thank you, Mr. Crenshaw. For saying what I couldn't say. Am I wrong? Do you disagree with my idea? That's ok with me. I'd be open to having a conversation. I'm interested to know what you think. For real.


Edit: Adding to this an article about the doctors who treated the man who shot and killed 11 people at a synagogue in Pittsburgh. Three caretakers - who saved the shooter's life - were Jewish. When asked about it, the president of the hospital, also Jewish, said, "He had a mother once, or maybe still does. He was loved by a family,” Cohen told the Tribune-Review. “How do you get from here to there?"

This brings me to today's book. The Wall in the Middle of the Book by Jon Agee is all about the way we view what separates "us" from "them." It is about assumptions, being afraid of what you don't know, and learning to see beyond the walls we build or the walls already built. Man, I can't wait to read this to my students. I bet older kids would really get some good discussions going with this one.

Which side of this wall is dangerous? Is it the side with the wild animals? Or the side with the rising water? Maybe it's the tiny mouse. What do we do when faced with something that feels threatening? How do we know what the real threat is? Deep? Yep. God, I love picture books. 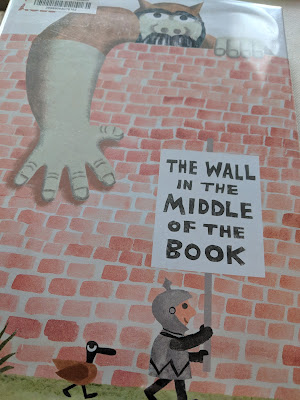 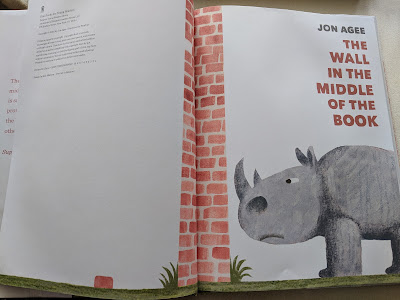 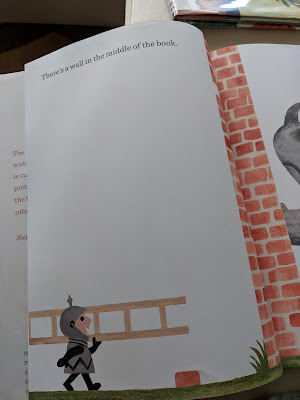 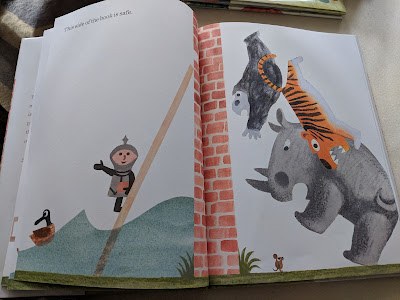