It seems that being on zoom calls and parenting all day has made me reject the idea of sitting at my computer one second longer. So while I thought I would get caught up on writing and blogging, I have been called, instead, to make and do things. I've knit a couple things, I've put gardens on both my front porch and my back porch, and I've gone for lots of walks. Once a week I manage to get some words in my journal and I've read lots and lots of books. But taking time to sit in front of a computer for more time than necessary...not necessary.

And yet.
Today is Mother's Day. I've failed, again, at getting anything sent to my mother on time. It won't even be close to being on time because it hasn't even made its way into an envelope and today is THE day. So instead, I'll use my words and share them publicly because it seems, as it usually does, that I rediscover what an amazing mother I have on a regular basis.
Recently I finished the book Untamed by Glennon Doyle. Read it. Give it to your friends to read. It was empowering, it made me question some things, and it was also inspiring. Doyle writes her third memoir, yes third, unapologetically because she is still creating a life that feels more like her own. At one point, she talks about the roles mothers play in the world. Here's what she said... 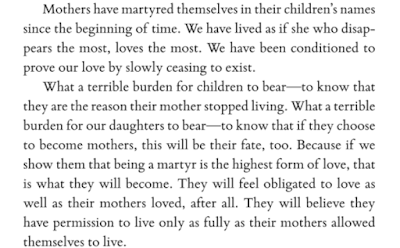 Followed up a couple paragraphs later by...

I read these paragraphs and thought...yeah, I already knew that. Why didn't you? And then I thought about a lot of mothers I know who do feel like Glennon observed, that mothers should be martyrs to show love. How did I already know this?
My mother.
Of course. My mother.
When my mother had her first child at the age of 20, she was newly married and no longer attending college. Then she had her second, me, just 13 months later. Two years later - my sister. Four years later - my youngest brother. She showed her four very young children that it was possible to live and be a model when she went back to college. My mom started at the community college. She killed it at the community college. She didn't just take classes, she was also the student body president. 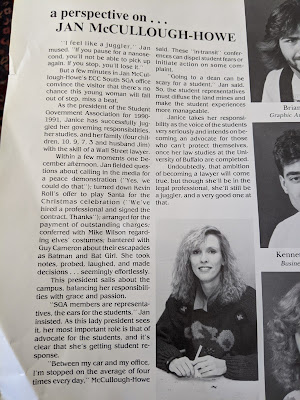 My mom is a model.
A few years ago I asked my mom if she ever stayed at home with us. I mean, the earliest memory I had was her going back to school so I wasn't quite sure what happened before that. Yes, she told me, she did stay home. But she didn't want to lose herself so she picked new things to learn about and then would try become an expert at them. One year she learned all about Anastasia Romanov. Even today, it is not uncommon for one of us to call our mom and she starts telling us about the new thing she is doing. When she became a mother, she showed us she was not a martyr.
Since I've known my mom, here's a list of the things she has learned. (Note: I am sure there are some things missing. When I consulted my SO he said, "How do you say, 'She's really good at making people feel welcome?'")
You know how you see something at a store and you say, "Why would I spend money on that? I can just do it myself?" Well, I say that often and have never followed through. My mom is the person who follows through.
When I became a mom almost two years ago it only made sense that I would not martyr myself. I continued to do my run/yoga group, I completed a certificate in Leadership in Early Childhood through Harvard, I read more books, I took trips to visit friends, I went on dates with my SO. When a friend commented, "It's so great that you are taking time for yourself," it was said in a way that actually meant, "How could you possibly abandon your child for yourself?" I know a mom who didn't go on her first date with her husband until her oldest child was 10.  It wasn't until I read Untamed, and that particular chapter, that it became clear to me that my mom knew all along what Glennon was just realizing. I'm sure there were days, weeks, maybe even years when my mom didn't feel like she was a model and when she felt like she was giving up part of herself for her family. I've felt that way in the short time I've been a mom.
So mom, I'm sorry I didn't send you this in a card. But I want to say thank you. Thank you for being a model woman and mother. Thank you for showing your daughters that it didn't matter if we were a mom or not - that first and foremost we were strong, independent people. Our lives, our choices, our successes and failures were ours to make and cherish. Thank you for showing us this highest form of love. Because of you, we strive to do this for ourselves and show the young people in our lives this same love.
Email Post
Labels: adventures marmie mother's day