I read a lot of children's literature. I read a lot of children's literature even before I was a mom or a teacher. Now, as a mom, I reread the same books about 10 times a week. I've started to notice funny little things authors and illustrators include in their stories. Most of the time, it is things I have missed the first or second time, or even the 10th time, around. Sometimes I think it is a subtle "wink, wink" from the author/illustrator, sometimes, like today's I Spy, it is just a happy coincidence. When I was a teacher I used to tell my students that rereading is great because you discover new things each time you read. I am constantly surprised with how true this is.

Thus begins a new series here on the blog - the "I Spy" series. When I discover some hidden little gem, or funny thing in a book I've read, I'll let you in on my find!

First up is from the old classic, Mike Mulligan and His Steam Shovel. Mike Mulligan is a book by Virginia Lee Burton. Burton has a pretty cool life story. She was born outside of Boston in 1909, moved to California, and later in life came back to Boston. When she was 23, she became a mom and eventually started writing children's books to entertain her kids. Later in life she started the Folly Cove Designers, a group of mostly women craftsman and designers near Rockport, MA. From the Cape Ann Museum website:

The Folly Cove Designers was composed almost entirely of women, most being residents of Cape Ann and a majority having no artistic training prior to becoming involved in the group. They worked under the leadership of Virginia Lee Burton Demetrios, who devised a design course which she offered to her friends and neighbors in the Folly Cove neighborhood. Participants were urged by Demetrios to look to their surroundings for inspiration, to draw "what they knew" and to sketch their subjects over and over again until they made them their own.
Definitely check out the websites linked above for more information about Burton. She was pretty freaking awesome. 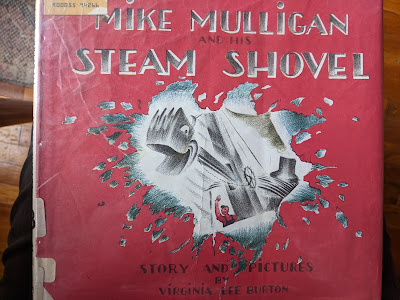 Anyway, in Mike Mulligan, we learn that steam shovels like Mary Ann are being replaced by gas, electric, Diesel motors and in one tragic scene, they are all piled at the bottom of a hill, waiting to be taken away. 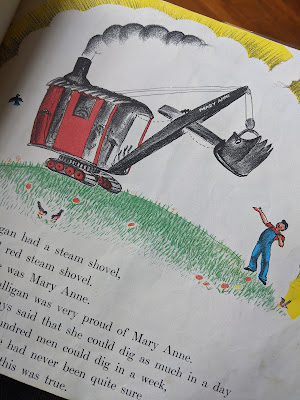 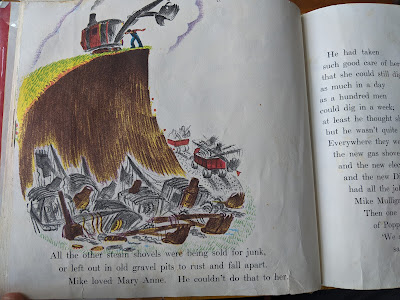 At the top of the hill, what did I spy?? A fraught Mike Mulligan...dabbing!?!?  Maybe it's because I've spent so much time around kids but the dab is the pose you take when you, well, basically when you do anything. It's how I taught kindergarteners to cover their sneezes. It's how we started to greet each other when Covid meant we could no longer high five. (A little education moment - dabbing apparently started with this video. Note, not all lyrics are kid appropriate. :))
Virginia Lee Burton, you were way ahead of your time!
Email Post
Labels: children's books i spy mike mulligan virginia lee burton