A Whole Bag of Mixed Everything

We knew the election results wouldn't be finalized when we went to bed last night. I was hoping for a blow out, something that would have no contest. I hoped America would actually be great again. My SO just gave me an update and said *maybe* Biden could win. Yet I'm sad angry that the people of my country voted for a man full of such blatant hatred for the citizens who live here. How? How is this possible? We are a complicated country, to be sure. The long arm bends toward justice, so they say. We're fighting not for now, but for the future. But damn. I just figured maybe it was time. 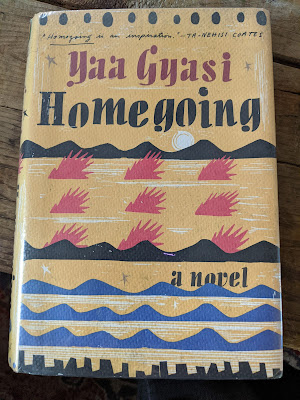 Oscar and I took a walk today. He found a huge stick and it kept bonking us both as he walked with it. So we broke it in two and he sang songs and walked through leaves and soaked up the unseasonable sunny warmth. He is oblivious to the sickness that has a hold on this country and for that short walk around the block I envied him. If it is going to get better for his future, well, maybe his future children's future, then the work starts now.

Have you read Homegoing by Yaa Gyasi? It tells the story of a long arm. A family, starting in Africa, split in two by tragedy. One branch stays in Ghana, the other heads on a slave ship toward America. There are stories here in our country that are worth knowing. If you haven't explored this part of our history, Homegoing is a place to start. I can't imagine someone reading this book and still voting for the hate that they did.