I'll be taking the next couple of weeks off to enjoy some much needed rest time. The SO has time off and we've been in complete isolation for 3 weeks so that my sister and her SO, who have also been in isolation, can spend time together. I miss Jessie with every fiber of my being so pardon my absence as I soak up the entire visit. Here's the last post of 2020. 2020...don't let the door hit you on the way out.

Right around Thanksgiving, the SO made an observation.

"We don't have any Christmas books." I gasped and ran up to the attic where my personal library sits, very organized, on shelves. I found...three. Two chapter books and one picture book my sister gave Oscar a few years ago. How could this be? It appears that Hanukkah books weren't the only holiday books of mine to disappear.

Oscar is now two and a half and before this holiday season we discussed how we would approach the whole "Santa" thing. Neither the SO or I are religious so we didn't have a religion to hang our hats on for the holiday. Santa was something we felt like we could do but we just weren't sure how to start. How parental. After a brief discussion we decided we would tell him the basic few things and follow his lead. If he was interested, cool, if not, also cool.

I'm sure 99% of you out there could predict, better than us, how this went. Oscar latched on to Santa Claus, Frosty, Rudolph, the whole thing tighter than he clings to his favorite toy in bed. We live in Santa land now. He frequently "sees" Santa flying through the air on his sleigh, he spots him in every single decoration on every single house we walk by. It was clear that we needed to get some books. The SO jumped on it almost faster than Oscar did so we now have A LOT of books. Here they are and they are all Oscar approved.

Santa is in a hurry, he's got Christmas obligations after all! He gets suited up, heads out the door, and then...oh no! Santa's got to go! A Santa who forgets to go to the bathroom? You got it! We were all giggling at the Santa running back to the house to go to the bathroom. 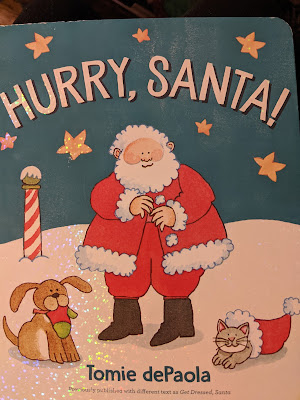 Christmas is Awesome! story by Sabrina Moyle, pictures by Eunice Moyle
A good friend of ours sent this book our way. A short little rhyming board book, it is the perfect intro to all things Christmas. Trees, lights, jingle bells, you name it! There is a little lump of coal who runs around stealing the show on every page. It was hard for Oscar to understand why we thought it was funny but someday he'll get that part too. 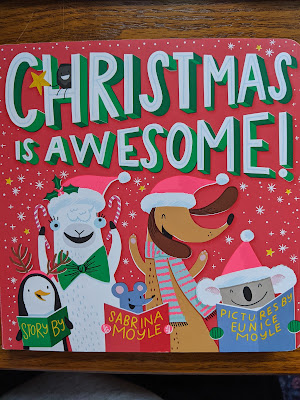 Gingerbread Baby by Jan Brett
I was hell bent on getting a good version of the classic kind of gingerbread man story into Oscar's hands. The only issue I have with this book is that it is a baby, not a man, so the rhyme I was familiar with (Run, run, as fast as you can, you can't catch me, I'm the Gingerbread Man!) was tweaked a bit. However, I chose this version, in the end, because Jan Brett is freaking amazing. In case you aren't familiar, Brett is famous for including frames around her illustrations that tell a part of the story as well. It is beautiful, it encourages inferencing, and it is more fun to read than a straight linear story. Fun story, when I told Oscar we got a new book called the Gingerbread Baby he asked me, "Who made it?" I said, "Jan Brett made it." Oscar looked around and called out to the universe, "Thank you Jan Brett!" 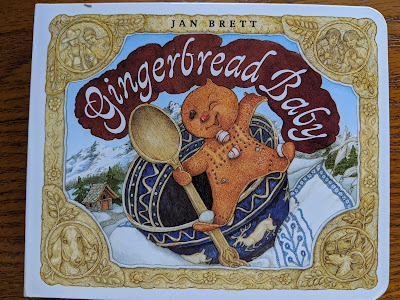 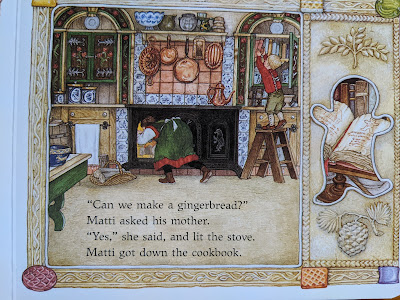 The Polar Express by Chris Van Allsburg
I'm sad to report that many people I know don't realize Chris Van Allsburg is the brilliant mind behind some of their favorite childhood movies. (The Polar Express, Jumanji) I know this because I live with one of them. The SO wanted to watch a family Christmas movie with Oscar and he suggested The Polar Express. "Over my dead body he'll watch that movie before he reads the book." I may have been a bit dramatic but I felt the air leave my body when the SO followed up with, "Oh, it's a book too?" I guess I forget that not everyone is as obsessed with children's books as I am. This led to me getting an immediate delivery of the book.
In case you didn't know, yes, there is a book. It is gorgeous. Gorgeous enough to have won the Caldecott. After reading the book and watching the movie back to back, I can assure you that the book is way better. The movie adds a lot of action which, to me, misses the quiet beauty of the book. Want to do something fun? Read the book and watch the movie with your kiddos! Take a poll to see what they liked better but make sure they tell you why! 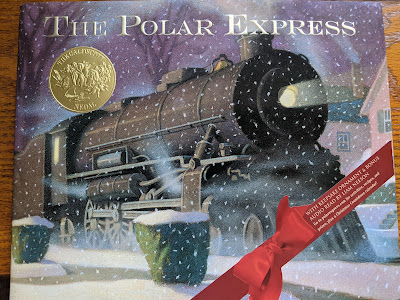 Auntie Claus by Elise Primavera
My sister takes her aunt responsibilities very seriously. I knew this before I was a mom and when I was an aunt with her. She held up her reputation when Oscar entered the world. She makes sure he is cultured in the ways of being a Buffalo Bills fan, knowing the best HGTV, and fort building. She also made it her responsibility to buy him a copy where the aunt is just as important as the Santa. Enter Auntie Claus. Auntie Claus is Sophie's great aunt who mysteriously leaves every year between Halloween and Christmas. When Sophie gets curious she is let in on a family secret. A great story to send to your nieces and nephews that might leave them wondering too. 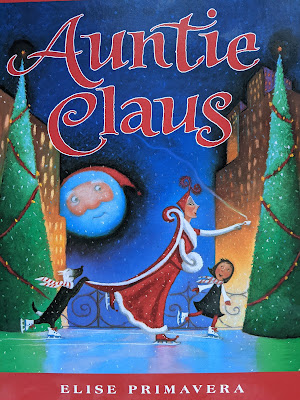 The Night Before Christmas by Clement C. Moore, illustrated by Henry Fisher
Obviously if you are building a Christmas canon, The Night Before Christmas must be included. Oscar was super pumped to see all the signs of Christmas/winter in the illustrations. It went something like this.
Gasp! "Snowman!"
Gasp! "Christmas tree!"
Gasp! "Stockings!"
Gasp! "Reindeer! Santa! Sleigh"
When Oscar noticed Santa coming down the chimney and asked what was happening, I gladly told him that was how Santa got in everybody's houses. He took one look at our fireplace and burst into tears. ("Obviously," my sister sternly told me later, "it is super creepy.") I assured Oscar we could write to Santa and ask him to ring our doorbell. This made him feel a bit better. I can't say that this version holds anything special over other editions. But it did elicit a lot of excitement, and a little bit of fear. Sorry Oscar! 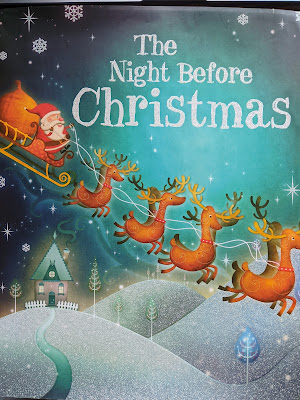 What is the best Christmas book to buy a toddler obsessed with marching bands? One who also happens to love every Sandra Boynton book every made? THIS book! There are bass drums and bassoons (shout out! I used to play bassoon too!) and snare drums and tubas...and reindeer and Santa! What more could a kid want in a Christmas book? This is a book Oscar sleeps with so it was a bit tricky to get a picture. Often he wakes up singing, "Boom-biddy-boom! 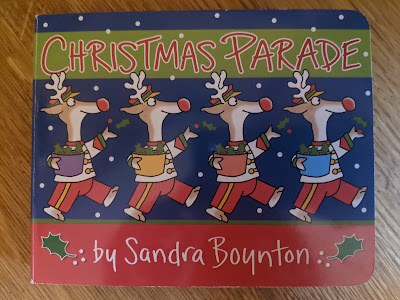