Before the Ever After - Jacqueline Woodson 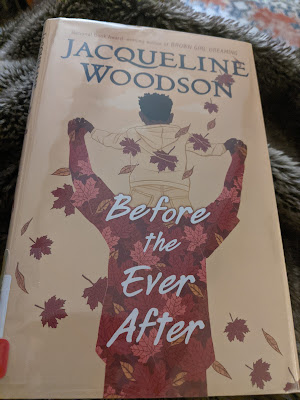 Jacqueline Woodson is a force to be reckoned with. She nails it again with this lyrical novel. I didn't realize, when I picked up this book on Super Bowl Sunday, what it was about. Before the Ever After won a Coretta Scott King Award this year so I checked it out immediately from my local library. It tells the story of Zachariah Jr, ZJ, the son of a pro football player. The year is 1999 and Zachariah's dad starts acting funny. First it is shaky hands. Then it is headaches. His mood starts changing, his memory fades in and out.

What ZJ and his family start to learn is that his dad's love of football may be what's behind his changing brain. Doctors keep saying they don't know what's wrong but ZJ overhears his mom saying other football wives are experiencing the same symptoms with their husbands. Woodson chooses to tell this story from the perspective of a young child who just wants to know if his young father, only 35, will ever be the same again. Will they ever share songs? Will they ever have Man Time? Or is this what is ever after?

Back matter fills out the missing pieces. That C.T.E., which has been found in many NFL players, was sort of brushed under the rug until 2016. Honestly, I couldn't look at the tv screen Sunday night after reading this book. We are so lucky for Woodson who tells us a story that doctors didn't tell until 2016, and we aren't hearing in this form until 2021. I love where the world of children's literature is taking us.