A while back I became interested in learning more about the life of Margaret Wise Brown. It started with a questions after reading her book, Mister Dog. Who would write such a specific and peculiar book? I read a couple of articles which revealed Brown was in a long term relationship with a woman and also engaged, later, to a Rockefeller. Oh, all this and she wrote over 100 children's books and she lived in a time when there were pretty specific expectations about the role of a woman.

I found two biographies, one children's book and one adult book and picked up both from the library. Here's what I thought. 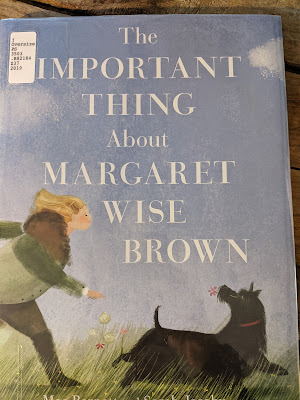 I was immediately interested in this book for two reasons. Reason 1, Mac Barnett. I love his books. Reason 2, another question. How would a children's book address Brown's relationships? I was happy to see that Mac Barnett lived up to his reputation of writing quality literature. First of all, he wrote the book in 42 pages because Brown lived to be 42 years old. As he notes, you can't fit an entire person's life in 42 pages so he would just include, "the important things." Brown didn't shy away from serious and important things in her books. Barnett honors this by also including the things some people say might not belong in children's books. This was a beautifully done tribute to Brown.

In the Great Green Room: The Brilliant and Bold Life of Margaret Wise Brown by Amy Gary 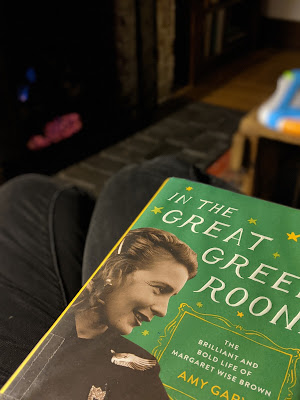 Amy Gary collected interviews, journal entries, unpublished books, and so much more to put together the story of Margaret Wise Brown's life. I was blown away by the level of detail and stories that give the reader an in depth look at every aspect of Browns's short 42 years. It's the tale of an anti-hero in some ways. ("I don't like her at all," my mom told me after also reading the book.) I had a soft spot for Brown, maybe because I too have had a fleeting relationship with books and romance. The stories of Brown's love come across as those of an insecure teenager, not an older woman. She wants to have more serious relationships with Bill Gaston and Michael Strange (Blanche Oelrich). Both kept her close but never gave Brown what she was looking for - a deep, meaningful relationship with passion and romance. When she finally found it in James Stillman 'Pebble' Rockefeller Jr., she died a short time later. 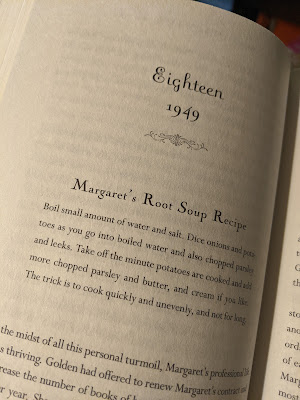 While Margaret may have been unsure about relationships, she was very sure about what it took to make a quality children's book. Gary gives great description of how Brown pushes for her beliefs, describes what children need and parents should look for, and shows great depth of understanding of child development. While I may have wanted to tell her to move on from those relationships with people, I applauded her heels as they dug in deep for children and children's books. 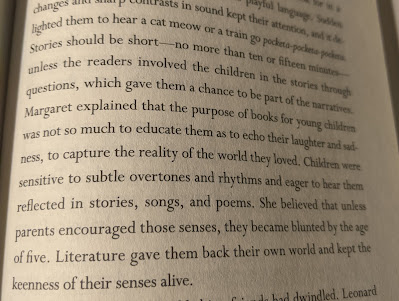 If you want a deeper look into Margaret Wise Brown's life, these both proved to be interesting reads!